Catholic parishes across the Archdiocese of Sydney will welcome four new priests when they are ordained at St Mary’s Cathedral next Saturday by the Archbishop of Sydney, Most Rev Anthony Fisher OP.

Aged in their 20s and 30s, the four men come from a wide range of professional and personal backgrounds.

But who are these young men answering God’s call in dedicating their lives to the work of the Church and how did they discover their vocation? Find out about their journey to priestly ordination here: 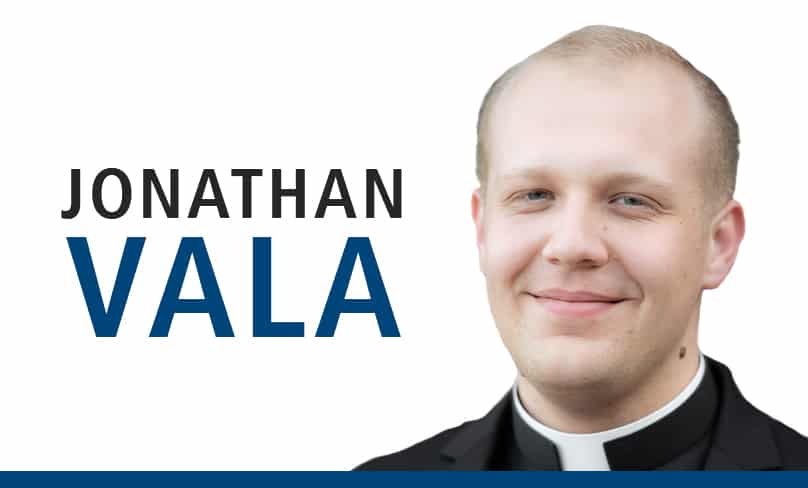 Age isn’t always the most important attribute to have as a priest according to Deacon Jonathan Vala.

At 24, he is one of the youngest men to be ordained to the priesthood in Australia, and considers his youth a real strength not a weakness.

Entering the seminary straight after completing his HSC at Redfield College, he said he did consider studying or working for a few years before entering but in the end couldn’t see any point delaying the inevitable.

“God calls some people earlier and some people later, he just called me very early,” he smiled.

“I first had an indication that He was asking me to give my life to Him in a complete way from early primary school and it gradually became clearer and clearer as I went through high school.

“AT 24 YES I AM YOUNG, BUT I ALSO THINK IT MEANS I AM ABLE TO ADAPT TO NEW RULES AND REGULATIONS SO IN A SENSE IT’S A LITTLE EASIER.

“I haven’t had years and years to develop my own ways of living and thinking.

“I’m just grateful He called me when He did because I can’t imagine spending four or five years trying to form myself outside of the Church in those really crucial formative years between the ages of 17 and 22.

“Thank God I had the opportunity to spend that time inside the Church with the guidance of really good priests and lay people around me.”

Deacon Jonathan’s earliest memories are at age seven, sitting on the carpet at the back of the Church, completely mesmerised by the rituals and symbolism of the Church.

“I would sit there in awe seeing incense flying around and being wrapped up in all of the history and symbolism, it was just so hypnotic,” he said.

“I can’t speak highly enough of Redfield, learning about Adoration and silent prayer from a young age I knew it was always something that I saw great power in and felt drawn to.

“For me, priesthood was so run of the mill as I was surrounded by so many good examples of priests and lay people that I saw a vocation as normal. It didn’t seem counter-cultural it was in fact the opposite.

“My school chaplain and Sydney Bishop Richard Umbers had a huge influence on my priestly ministry and vocation and for that I am very grateful.”

Jonathan admits that while his desire for a vocation was always there it did “ebb and flow” throughout high school.

AS WITH MOST TEENAGERS A GIRLFRIEND, SPORT AND STUDY BECOME PART OF HIS ROUTINE ALTHOUGH BY YEAR 11 HE HAD MADE THE DEFINITIVE DECISION THAT IT WASN’T A CASE OF IF HE WOULD ENTER THE SEMINARY BUT WHEN.

He did see merit in going to university or getting a job so turned to prayer for guidance and kept coming up with the same answer.

“I guess I saw value in getting out there and getting some experience and earning a crust as I knew how young I was at 17,” he said.

“As graduation week approached I was really lost and began to pray. I thought maybe I should wait and not enter the seminary but couldn’t think what I wanted to do. Everything else made me very listless and not motivated, the only direction I felt any passion for was the seminary.

“So I called the Vocation Office, they accepted my application and the rest as they say is history.”

Deacon Jonathan spent two years at Sydney’s Good Shepherd Seminary at Homebush before completing his studies in Rome. He will return to the Eternal City following his ordination to complete his Licentiate in Dogmatic Theology and then return to the Sydney Archdiocese. 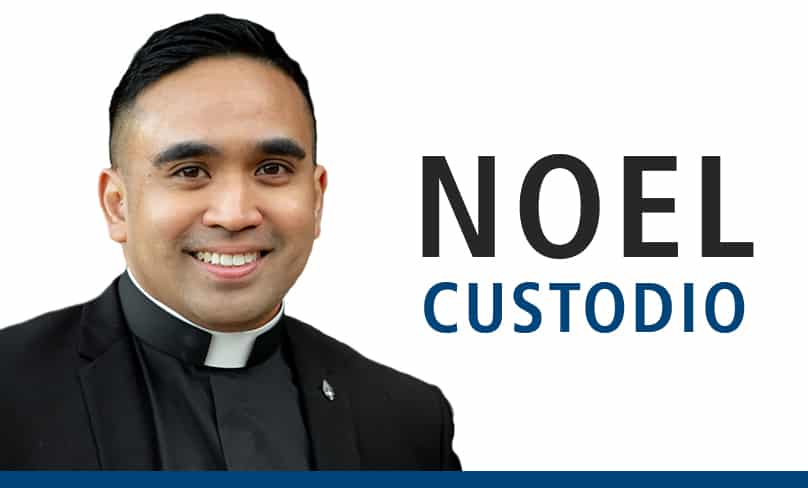 Born against the odds, Deacon Noel Custodio was considered by many as a “miracle baby” which is why he has always believed God had a special plan for him.

It just took a little while to realise that plan was the priesthood.

“Without doubt God really wanted me in this world,” he said.

“My mum had challenging medical issues so the chances of me being born were very small.

I GUESS I HAVE ALWAYS FELT GOD HAD AN INTENTION WITH MY LIFE, I JUST DIDN’T KNOW IT WOULD BE AS A PRIEST.”

The former student of Punchbowl’s St Jerome’s Primary School excelled academically and enrolled in a selective government high school, moving away from this Catholic education and his faith.

After graduating and much soul-searching, he enrolled in a teaching degree majoring in English and drama but couldn’t shake the feeling that there was something else for him.

Attending Mass sporadically and involved with his local youth group, he didn’t think that would involve his faith until he attended World Youth Day in Sydney in 2008.

“To be honest I was completely blown away seeing the power of God’s love in young people’s lives at WYD,” he said.

“I really was at a crisis about what to do, but seeing these young people on fire for the love of God made it all start to make sense.

“Seeing so many people so proud to profess their faith publicly made me hungry to know more.

“My passion for teaching was dwindling while my thirst for God was growing deeper along with my need to serve him. I began to appreciate the beauty of the Mass and the significance of the Eucharist.

“AFTER MONTHS OF CONTEMPLATION I DECIDED TO TAKE A LEAP OF FAITH AND FROM THE MINUTE I WALKED INTO THE SEMINARY I FELT FREE FOR THE FIRST TIME IN A LONG TIME.

“I did have a real fear of giving my whole life up to God but in the end there was a sense of just letting go of all the preconceived plans I had for wanting to get married and having a job and putting that behind me and choosing to follow God.

“I won’t say it’s been an easy road but I can say that no matter what I have given up, I have been given tenfold in return.

“This life I am leading has given me so much joy, and I can only say to anybody thinking about a vocation, take a leap of faith and just jump, God’s got you and he will deliver.” 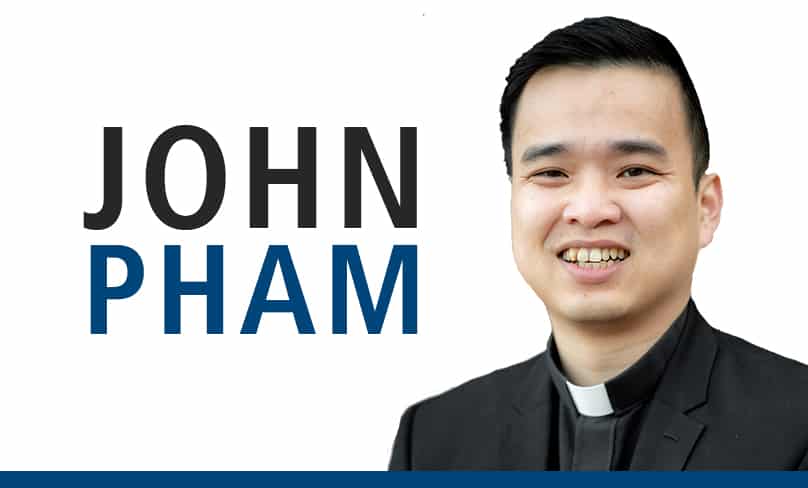 What started as a fascination with wearing vestments at just eight years old, led Deacon John Pham on an almost 20-year journey to the priesthood.

Growing up in a traditional Catholic household with 12 vocations from his immediate family including a Bishop, John’s earliest memories are of sitting in Mass in his Ho Chi Minh City Parish dreaming about being up on the altar preaching about God.

In fact his Dad spent 12 years in the seminary and only left after the Government shut it down.

ALMOST 7,000KM AND TWO DECADES LATER HE IS MORE SURE THAN EVER OF HIS ORDINATION TO THE PRIESTHOOD.

John, 33, admits that while there were some “hiccups” along the way he knows he is on the right path.

“When I was in second class at school in Vietnam I would sit in Mass and think about how incredible it would be to wear those beautiful vestments and preach about God,” he said.

“Those thoughts stayed with me throughout my education and when I completed my HSC I entered the pre-seminary for three years which is what you do in Vietnam before entering the main seminary.

“While in the pre-seminary I attended university and studied accountancy before moving to Sydney two years later for what I thought would be a better education.

“I kept studying but the thought of the priesthood was never far away. After a few years I spoke to a priest about my calling and that I felt I needed to go back to Vietnam and enter the seminary but he pointed out there was a much bigger need for priests in Australia than Vietnam as it is so rich in vocations.

“I gave it a lot of thought and decided to stay in Sydney.”

DEACON PHAM ENTERED THE SEMINARY OF THE GOOD SHEPERD AND WHILE IT’S BEEN A LONG JOURNEY IT’S BEEN WELL WORTH IT.

Looking back he said he did give marriage and children some serious thought but at the end of the day thought he could give more as a priest than a dad.

“Through it all I have always had a strong desire to serve God and feel I have a real gift to guide people to him,” he said.

“We all have different vocations and I am more sure now than ever that mine is to the priesthood.

“Sadly my family won’t be able to attend my ordination due to COVID but I know they will be with me in spirit and praying for me each and every day.” 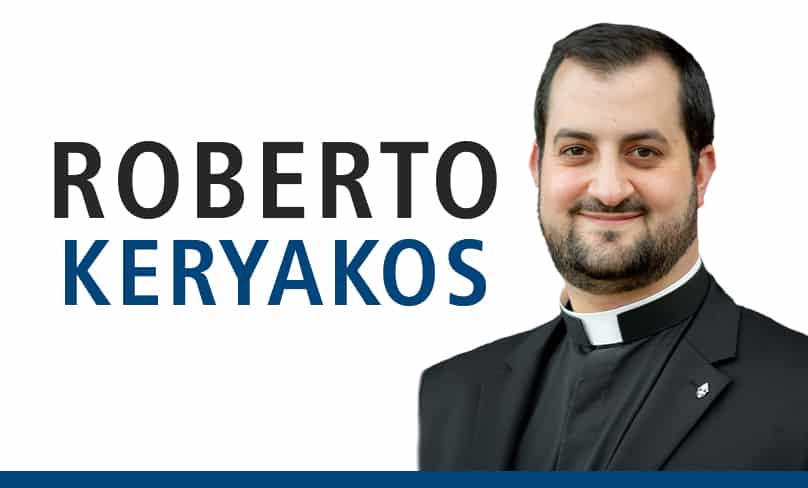 Deacon Roberto had his life all mapped out, a career in teaching, a wife and lots of kids … or so he thought.

The talented singer and former chorister at the St Mary’s Cathedral College was well on his way to a teaching career when he stumbled on the UNSW chaplaincy couch which changed his path forever.

Little did he know the lounge in the religious centre would light the spark for him to become part of the furniture in God’s House.

“I like my catnaps and found the chaplaincy had a great lounge which was the perfect place for me to have a rest in between classes,” he laughed.

“PEOPLE WOULD ASK ‘WHO IS THAT GUY THAT KEEPS CRASHING HERE’ BUT AS I GOT TO KNOW THEM I WAS SO INSPIRED BY THEM, THEY HAD A REALLY VIBRANT, DYNAMIC PRESENCE ON CAMPUS WHICH I WANTED TO BE A PART OF.

“I never grew up in youth groups and thought they would be all about jumping for Jesus so wasn’t that keen to join but when I did I was really surprised, they all seemed so normal.

“And the more involved I got the more I wanted it.”

He said God started to talk to him about the priesthood and just as importantly he started to listen.

“I thought, God knows best so it really was a win-win situation,” he said.

“If I try the seminary out and it’s for me great, if it’s not for me I can tick it off the list forever and find a beautiful girl and have lots of kids.

“It just turned out it was for me and I couldn’t imagine being anywhere that could make me happier.

“As soon as I entered the grounds I knew I was home, it was where I was meant to be.”

THROUGHOUT HIS DISCERNMENT, DEACON ROBERTO HAS DISCOVERED HIS GREATEST STRENGTH CAN ALSO BE HIS GREATEST WEAKNESS AND SAID HIS VOICE IS SOMETHING HE HAS COME TO USE WITH GREATER CARE.

Guided by his favourite Saint, St Joseph, from whom there are no words in the Bible, he said he has discovered you don’t have to be loud to be heard.

“St Joseph achieved such great things from the background and that’s somewhere I aspire to be,” he said.

“I learnt some great lessons from some of the Vietnamese seminarians in particular at the seminary who are very gentle and achieve great things. I am loud and very cheeky which was something I’ve had to address.

“Although at the end of the day all I want to do is help people get to Heaven, that is what I am called to do and makes me very happy.”