A Vocation is a Gift You Receive, Not Something Created or Earned

Open Side Close Side On the eve of his ordination as a priest by Archbishop Anthony Fisher OP on 15 August, Deacon Lewi Barakat encourages every young Catholic to seriously pray and discern the call to consecrated life.

“Don’t be afraid to take that first step in faith and to open yourself up to God,” he says. “A vocation is a gift you receive. It is not something created or earned. It has to be offered and if it is offered, you have to be listening and open to God.”

As dioceses across Australia celebrate National Vocations Week which began yesterday, the 31-year-old admits that unlike a large number of seminarians and priests, he did not think about the possibility of a priestly vocation until he was in his 20s.

Although a great many priests begin thinking about the priesthood during their time as altar servers or while at school after being inspired by a parish priest or one or more of their teachers, for Deacon Lewi the call to the priesthood came in adulthood.

Growing up in a close-knit family in Auburn, Deacon Lewi studied Exercise Science at the Australian Catholic University (ACU) and on graduation, spent the next four and a half years as an exercise professional as well as working in corporate health industry.

“I had had an increasing passion for God since my uni days, and I had always wanted to serve Him in whatever I did, whether I was working as a personal trainer or in an office,” he says.

Although serving God was something he had pondered throughout his teenage years, it was only after attending World Youth Day in Sydney in 2008 that he made the decision to enter the Seminary of the Good Shepherd at Homebush.

“Over two or three years before World Youth Day I had become more open to God and I knew I wanted to be a Servant of Christ and the best servant to Christ I could be,” he says.

At 24, Deacon Lewi became a first year Seminarian, entering the Seminary of the Good Shepherd with Christian Stephens, a good friend from his uni days when they both studied Exercise Science.

Although Christian ultimately discovered his Vocation was not the priesthood but instead to be married and serve God in other ways, Deacon Lewi knew from the day he entered the Seminary that was the right decision and becoming a priest, was the path God had chosen for him. 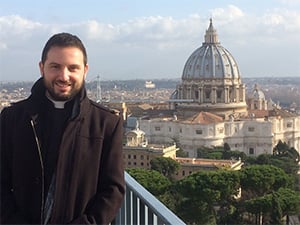 Deacon Lewi Barakat with St Peter’s Dome in
the background

For his Syrian-born parents, elder brother and two sisters, Deacon Lewi’s announcement that he was entering the Seminary to train as a priest came as a shock.

“When I told them there was silence. None of them spoke. The dialogue about the priesthood had been in my heart with the Lord over a period of two or three years. For my family there was no preparation. But after their initial shock they started asking questions…didn’t I want to get married?…didn’t I want to have children?…was entering the seminary and becoming a priest what I really wanted?..would it make me happy?” he says and recalls how his parents, raised in the Syrian Catholic culture had expected their youngest son and last of their children to marry and give them grandchildren.

“Since that time, their thinking has totally changed. They have seen my own transformation and my happiness and joy. They have also now met many outstanding young seminarians and priests and know I made the right decision,” he says and describes the first year as a seminarian as a time of “growth and nourishment.”

“That growth continues with each year as your training progresses as a priest and you discover the beauty of the path God has prepared for you,” he says.

Deacon Lewi had only been at the Seminary of the Good Shepherd for two and a half years when the former Archbishop of Sydney, Cardinal George Pell gave him the opportunity of completing the final years of his studies at a Pontifical University in Rome.

The Rome study initiative was developed and promoted by Cardinal Pell to enable seminarians studying at the Seminary of the Good Shepherd to study at one of Rome’s Pontifical Universities for their Licentiate degree in Sacred Theology or similar disciplines.

But when offered this unique opportunity, instead of grabbing it with both hands, Deacon Lewi worried that as all the lectures at Rome’s Pontifical Universities are delivered in Italian, and he spoke no Italian himself, that it would be too difficult, and that he would not be able to study Theology as deeply as he had hoped. 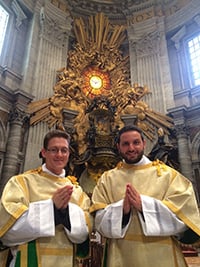 “I asked His Eminence to give me time to discern and pray before making a decision,” he says.
Deacon Lewi sought the counsel of several wise priests as well as other seminarians, but it was Cardinal Pell who finally convinced him that the chance to study in Rome and experience the universality of the Church was the right decision.

“Cardinal Pell saw things in me, I didn’t see myself. He stretched me in a way that has taught me so much more, not only about God and the Church but about myself,” he says of his time studying at the years in Rome.

As a student at Rome’s Angelicum as the Pontifical University of St Thomas Aquinas is popularly known, Deacon Lewi quickly became fluent in Italian as Cardinal Pell had predicted.

“I trusted in God’s providence to work through me,” Deacon Lewi says.

In addition to his studies, he also made his mark as one of the Vatican’s most outstanding soccer players. A top-flight amateur footballer in Sydney, Deacon Lewi has captained as well as coached the American Martyrs to victory in the Clericus Cup – the Vatican’s answer to the World Cup.

With 16 teams comprising more than 350 priests, deacons and seminarians studying in Rome, the Clericus Cup is hotly contested with the Deacon Lewi’s American Martyrs regarded as the ones to beat.

The American Martyrs players including Deacon Lewi are selected from the seminarians who live at the Pontifical North American College during their studies in Rome.

A frequent spectator at games is Cardinal Pell, who is now based in Rome as Prefect for the Secretariat of the Economy of the Holy See.

“The Cardinal keeps in touch all the Australian seminarians over here and watches our football matches whenever he can,” says Deacon Lewi.

In early October last year, on the Feast of the Guardian Angels, the Australian seminarian was ordained to the transitional Diaconate at St Peter’s Basilica. Attended by his proud family, he along with 43 others from the Pontifical North American College were ordained by Cardinal Donald Wuerl, Archbishop of Washington DC at a ceremony that included Cardinal Pell as one of the concelebrants.

Now Deacon Lewi is preparing for his ordination as a priest.

He will spend the week prior to the ordination on 15 August in silent retreat and says he approaches this important milestone with deep humility. 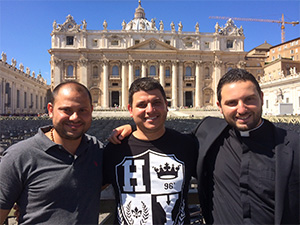 “The ordination will represent a culmination of the years of study but it is also a beginning. I am very aware that this is part of God’s plan and of God being in me and preparing me for this day,” he says as he looks ahead to serving God and people as a priest, providing pastoral care, hearing and absolving sins in Confession, ministering to the sick and bringing Christ to people in the Blessed Sacrament.

Not only will his entire family be at St Mary’s Cathedral for the Ordination in just over two weeks’ time but three great friends he has made during his time in Rome are flying out specially to be there as well. Two are newly ordained American priests and the other a seminarian from Manchester in England.

As Father Lewi Barakat, the 31-year-old will return to Rome at the end of next month to complete his final year of studies for his Licentiate in Dogmatic Theology at the Angelicum. But just before he flies out he will celebrate a wedding for close friends of his family on 19 September.

A second Sydney deacon will also be ordained  on 15 August by the Archbishop – Deacon Tom Stevens.